What is the best ice skate blade soaker 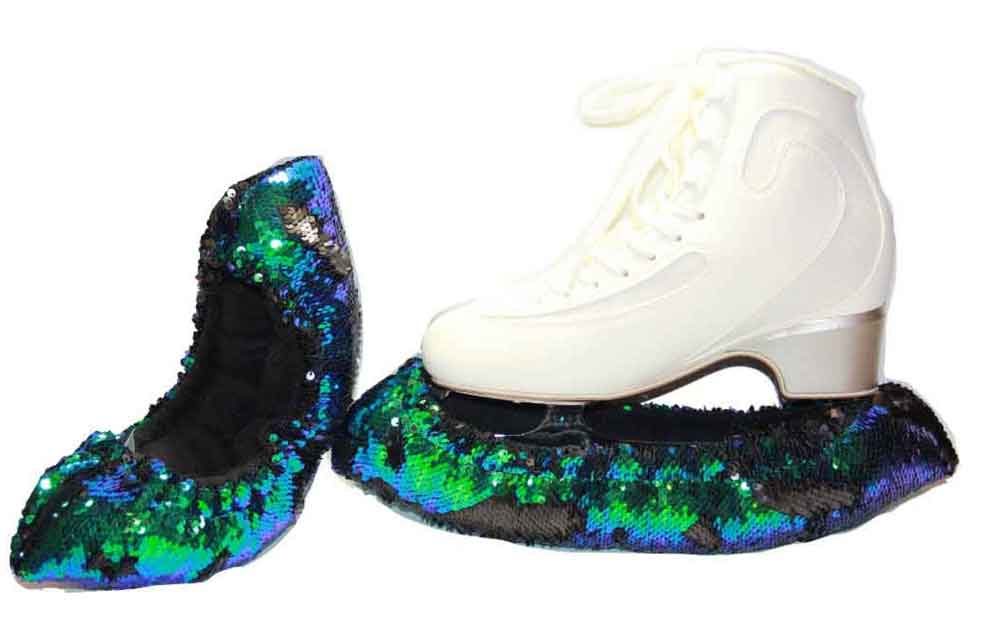 What is an Ice Skate Blade Soaker?

An Ice Skate Blade Soaker is a soft cover that stretches over the blade to cover it while the skate is stored.  Soakers are a required piece of skating equipment essential to maintaining the integrity of the skating edge of the blade and extending the life of the blade.  And chances are that the pair of soakers you currently have are either manufactured by Fuzzy Soakers® or their design was inspired by Fuzzy Soakers®

Why is a Ice Skate Blade Soaker Necessary?

The ice skate blade soaker serves several purposes.  Primarily the soaker will absorb condensation as the blade warms after skating.  After skating, the skater needs to thoroughly dry the blade, the blade plate, and the bottom of the skate with a chamois or other soft absorbent towel.  Even after thorough drying, condensation will continue to collect on the blade as it warms.  Once the blade has been properly dried and placed in the soaker, the soaker will serve to absorb this condensation and move the moisture away from the blade.  If a blade is not properly dried and placed in a proper soaker it will rust.  A severely rusted blade will dull the edges and require sharpening to restore the edge.  Each sharpening shortens the life of the blade as each time the blade is sharpened a portion of the blade is removed.

The soaker should also have thick padding that surrounds the entire blade, edges, toe pick and tail in order to protect the blade’s edges from nicks.  If the blade is covered with a soaker that lacks adequate padding, then the blade is at risk of being nicked by surrounding items in the skate bag.  A nicked blade can have a tremendous impact on the skaters ability to perform jumps and spins. Nicks cannot be skated off.  They will require sharpening to repair, again shorting the life of the blade.

The soaker also need to be reinforced in the toe pick and tail areas.  This is where you will find a real difference in quality among soakers.  Many homemade versions or low-end versions lack this feature.  The ends of the blade will quickly cut through the soaker exposing the toe pick and tail of the soaker.  And while the running edge of the blade may still be protected and the skater may not immediately notice nicks in the tail of their blade.  These nicks will accumulate and may require the sharpener to take more of the blade off in the next routine sharpening to correct.  Additionally, the exposed tail or toe pick will damage other items in the skating bag as they can be razor sharp especially after a fresh sharpening.

Early ice skate blade soaker designs were usually constructed using a thin outer layer of cotton print fabric lined with cotton terry cloth.  While they did provide some protection against nicks, they did little to wick the condensation away from the blade.  Cotton terry cloth is absorbent but retains moisture.  It does not wick the moisture away from the blade which is critical to prevent rusting.  A cold blade should not be stored in cotton the same way a skier will not ski in cotton socks (cotton socks will not wick the sweat away from the feet and the skiers feet will get cold.)   Once the Terry cloth becomes wet the blade lays against the wet fabric causing the blade to rust.   Here is a picture of an early generation soaker where you can see the rust stain from the blade.

The second major problem with early generation blade covers where their lack of proper padding. Without any padding, the blades were still vulnerable to nicks while being stored.  Some manufacturers began putting rectangular pieces of foam in the soakers that laid against the sides of the blade. The placement of the foam did nothing to protect the sharp edges on the bottom of the blade, or the tail and toe pick areas.  As a result, the blades would quickly cut through the soakers and expose the blade to nicks and potentially damage other items in the skate bag. This would be a frequent frustration after placing a freshly sharpening a pair of skates in your soakers.  You would almost surely be replacing your soakers because of cuts at the toe pick and tail.  Below is a picture of an early generation ice skate blade soaker with tail and toe pick areas cut through because of improper padding

In addition to the above functional problems with the early generation ice skate blade soakers, was the fact that they were just not very creative from a fashion sense.  Since every skater had to have a pair, attention to style seemed to be lacking.   Most appeared to be made from cheap cotton print fabrics or some other fabric bought in bulk that really didn’t appeal to anyone’s style.  Below are photos of some early soakers

Fuzzy Soakers® were invented in 2006 at the Olympic training center in Colorado Springs, CO.  At that time the selection of quality soakers on the market was very limited.  Mostly the pro shops carried a small selection of local homemade soakers made from cheap cotton print fabrics with a piece of foam inside the soakers. The ends were one layer of cotton fabric.

The problem with these soakers was that foam was a poor protection choice, the thin ends almost guaranteed that you would be replacing them every time after you sharpened your skates as the tails would cut through. And further they were basically ugly and didn’t appeal to the fashion, glitz and style that skaters are famous for

After multiple prototypes of fabrics and designs, The Fuzzy Soaker® was born.  They solved all the problems detailed above with the traditional ice skate blade soaker.  By redesigning the soaker to incorporate fabrics that would actually move the moisture away from the blade, rust was eliminated.  The foam padding blocks were replaced with polyfill that would surround all parts of the blade and allow the soaker to breathe.

The ends were padded and reinforced to essentially eliminate toe pick and tail cut through.  And after all the internal functionality was perfected we turned to designing an external look that would turn the soaker into a fun fashion skating accessory that skaters looked forward to getting.   The first generation of Fuzzy Soakers® featured silky “fuzzy” fabrics, hence the name “Fuzzy” Soakers.  We were also the first to incorporated bows on the soakers and other embellishments like pom poms and flowers.  Below is a picture of some of the first Fuzzy Soakers® designs.

The soakers were an instant hit with the skaters training at the Olympic center in Colorado Springs, CO.  and their popularity quickly spread.  Pro shops around the US began requesting to carry them.  Within the first year they were being carried in over 50 pro shops across the US.  Now they are retailed in pro shops in the US as well as internationally.  Among the location of international pro shops are China, The United Arab Emirates, Australia, Scotland, England, Ireland, Norway, Sweden, Canada and Mexico.  They are also available for retail purchase directly from Fuzzy Soakers® at the website www.fuzzysoakers.com.

Positive feedback from this redesign of the soaker was overwhelming.  Many skaters were finding that a pair of the Fuzzy Soakers® would last them years without cutting through.  And the ability to choose from over 100 styles  including the option to create a custom pair, vaulted the soaker from a necessary piece of equipment to a skating fashion must have item.

Because Fuzzy Soakers® manufactures in the United States and does not do bulk overseas ordering, we are able to stock hundreds of styles rather than the handful of styles available from other companies that outsource their manufacturing.  This has been a major separator for our company as skaters love variety and our constantly updating inventory

Fuzzy Soakers® is known for bringing the latest fashion trends to the soaker industry. After introducing fuzzy fabrics, bows and pom poms, we introduced wild faux furs under the trademark CRAZY FUR®.  In 2016 we were the first soaker company to make a soaker using the popular reversible sequin fabric.  And are the owner of the soaker trademark, FLIPZ® to identify our soakers constructed using this “flip” sequin fabric.  Of course both of these styles were instant hits.  Some manufactures have tried to duplicate these styles, but they lack our manufacturing quality and the variety in styles. Because we control our own manufacturing, we are the only ice skate blade soaker company offering over 25 different reversible sequin fabric soakers and over 50 different faux fur styles.   Below are photos of  CRAZY FUR® and FLIPZ® soakers.

What is next for Fuzzy Soakers®

Fuzzy Soakers® continues to be the leader in design and innovation in the soaker industry.  The latest addition to our offering is the option to personalize soakers with names and team logos.  We have also been working with several synchronised skating teams to create custom soakers to coordinate with their skating programs.  This is a new area that we are excited to service.

Also, at the request of the Olympic training center in Lake Placid, we have begun to manufacture speed skating soakers as there is also a lack of quality and variety for speed skaters.   They soon will be available for retail purchase at www.fuzzysoakers.com as well.  In 2016 Fuzzy Soakers® was brought on as a sponsor of the figure skating movie, Ice The Movie.  We are proud to be involved with this inspirational family film and to be the only retailer that sells copies of the movie on disk as well as all the official movie skatewear and gear. These exclusive items can be found on our website.

Fuzzy Soaker® will continue to be the innovator and leader in skating blade protection by bringing the latest in design innovations and fashion to our products.  Led by Layna Bullock pictured below, Skate Perfect thanks her for her contribution on such an authoritative article on ice skate blade Soakers and we 100% believe she has the best product in the industry to take on the world. 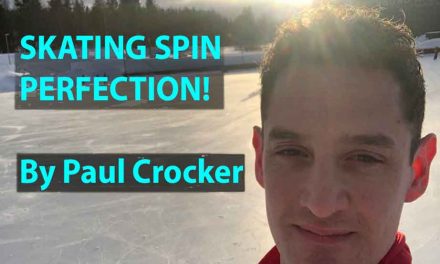 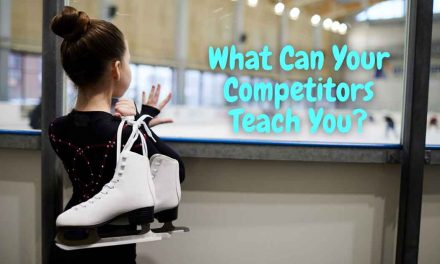 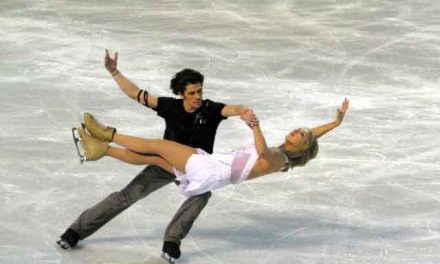 What are the Worst Ice Skating injuries 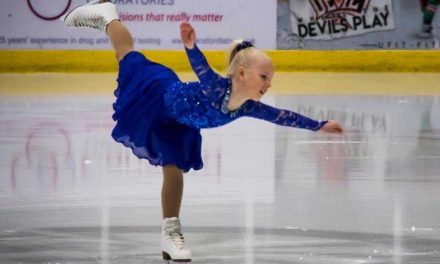 being the parents of a figure skater, Romy Davies-Jeans